The NBA Playoffs are right around the corner, and for basketball collectors, the 6-week playoff sprint is the year’s highlight. You’ve come to the right place if you’re looking for advice on playoff investing. We have some bold predictions for the 2022 NBA Playoffs! Let’s launch our first annual 2021-22 NBA Playoff sports card investing guide.

Sports card investing sees two jumps per sport throughout a calendar year. First, cards jump in value as the off-season ends and the regular season begins. Second, cards jump again for players heading into the playoffs. The deeper a team’s playoff run goes, the more valuable the cards.

This year’s NBA playoffs are marked by a particularly tight race in the East and a more top-heavy race in the West. First, we’ll look at potential matchups and storylines.

But please note: upon writing this article (April 8th), many teams are locked into their playoff seeds, but some are still in flux, including the play-in.

With that in mind, let’s look at the three rules of playoff investing.

Who's excited for the NBA Playoffs? #NBApic.twitter.com/PcxhjATdZA

If you’re trying to make money on NBA playoffs, I have three rules to follow. Of course, there are a few exceptions. However, sticking to these principles will serve as a roadmap to solid returns.

Rule One: Only One Team Wins

Playoffs can be full of surprises. However, there’s one thing you can always count on: only one team wins.

Yes, that’s a no-brainer, but sports card investment repercussions might be overlooked. A card’s value grows round after successful round. But of course, that stops when the team gets beat out of the playoffs. Then the value immediately suffers the dreaded off-season dip.

In other words, it’s often better to sell your cards a bit earlier – especially if the player isn’t on a championship-contending team.

Unless you can find an exceptional deal – perhaps even a misspelled listing – don’t buy during the playoffs.

Consider this: If you bought a rookie today of a player that would ultimately make it to the conference finals, you would have about four weeks to get the card in, list it and sell it to take advantage of the rise in prices. So even when a rapid turnaround could perhaps see a 20% jump in value, that’s a risky move.

Instead, work from your collection to sell cards benefiting from the playoffs this year. Then, do the reloading during the offseason, when all cards dip. That way, you can take better advantage of the breadth of the market. 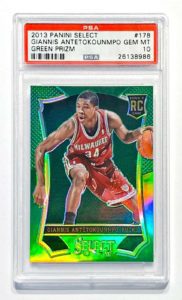 Is Giannis a buy or sell? Depends on whether you believe in the Bucks or not. Look for his rookie cards on eBay.

Rule Three: Think A Year Ahead

As you watch the playoffs, always view them with a lens of “next year.” Look for glimmers of talent that could turn into something special over time and make a list of players to hunt over the off-season. Make a list, even. Then, if you do that well, predicting who will take a significant leap in the upcoming year, your wallet will thank you.

As we reach the start of the playoffs, here are a few potential storylines we are excited about.

The NBA Finals are no strangers to rematches. Even in recent years, LeBron had back-to-back finals against the Spurs and the Warriors.

Accordingly, right now, the Suns and Bucks are the favorites to reach the finals again. The Suns aren’t a flashy team, but that makes it easy to overlook how dominant they’ve been. They get quality shots every possession at the end of close games, and teams can’t keep up. The Bucks don’t look the same as they did during their championship run last year, but they still have (arguably) the best player on the planet in Giannis.

What Of The Warriors?

At the beginning of the year, the Warriors looked like the best team. Since then, Draymond Green has battled injury, Stephen Curry got injured, and Klay Thompson looks like a shell of himself. Nevertheless, the Warriors could figure things out and make a deep playoff run or get bounced in the second round. Neither would be too surprising.

The Nets are currently number 8 in the East, ranked third with odds of winning the NBA Finals. Let that sink in. Yes, Durant is probably the best scorer the league has seen for a long time, and yes, Kyrie is back permanently. But the sportsbooks might slightly overlook how shallow the team is. Maybe Brooklyn gets it together and makes a playoff push, but getting past Boston, Miami, or Milwaukee in the first round is no small task. 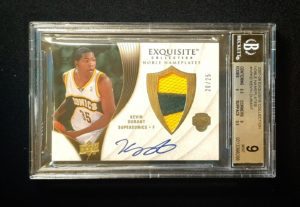 Can Kevin Durant push the Nets into contention? See how much his autos are going for on eBay.

New Kids On The Block

Several young players are stepping into a new light in the playoffs. First, Ja Morant is leading a dominant Memphis Grizzlies team to the #2 seed in the West. Second, Jayson Tatum seems to come into his own finally and has gone nuclear since the All-Star break. Finally, Luka is putting up 2012 LeBron numbers and looking to make it out of the first round for the first time. All three could make quite a splash.

We are now at the fun part. We’re making some bold playoff predictions for the 2022 NBA Playoffs. But, of course, we don’t throw the word “bold” loosely. These are swing-for-the-fences predictions, but some just might come to pass.

What if Harden wasn’t lacking the effort in Brooklyn? What if he just isn’t as good? He looks slower and much less devastating in one-on-one matchups. So how will that translate to the playoffs? This is a real possibility: Philly gets bounced in the second round, Joel Embiid is NOT happy about it, and the Sixers lead off-season drama headlines. Again.

Luka To The Finals

The Mavericks take care of business in the first round and then topple the Suns (and some other opponent) before Luka reaches the NBA finals for the first time. And don’t get me wrong, Phoenix is the odds-on favorite for a reason. However, the Mavericks could be a dark horse. One of the playoff bets I’m most excited for is that they reach the Finals (+2500).

Picture this: it’s time for the Playoffs, and Kawhi Leanord shows up for game one of the play-in. Reunited with Paul George, the Clippers suddenly became a Western Conference powerhouse. Meanwhile, Adam Silver desperately flips through the rule book to decide if the Clips can be fined. 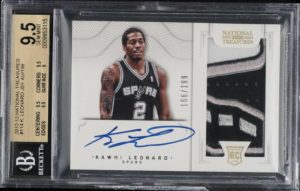 Will Kawhi come back as the savior? Check out his autos on eBay.

Whether the Nets finish 1 or 2, they’ll have a matchup with the Heat or Bucks. Not a great place to be if you’re a Nets fan. Either way, a contender is headed home in the first round.

The Heat have played several “who’s that guy” players this year that put up big numbers and minutes (Shoutout Strus, Vincent, Martin, and more), but their final trick is signing a 6’9, 250 lb,  37-year-old free agent named Leron Banes to help push for the Finals. LeRon, a clean-shaven man with a voice that sounds all-too-familiar, announces at his press conference, “It’s nice to be back, erm… here and help Miami push for another chip. Wait, did I say another?” He then counts future championships he anticipates winning with the Heat, committing to play until age 47.

A lot of money can be made during the playoffs, but you need a strategy. If you’re smart about selling and buying, you could be in for a couple of very profitable months. Good luck to you and your favorite team!

Do you have any players to watch or bold predictions? Let us know on Twitter @card_lines.

Under The Radar 2022 Bowman Prospects