Panini is back with another installment of their Panini Obsidian Soccer product and we have the 2021-22 Panini Obsidian Soccer Review to help celebrate.This is a heavy-hitting box, averaging four autographs or relics per box. This product also features incredible card art that is again inspired by volcanic glass. This higher-end product gives collectors the chance to get high-quality cards of some of the biggest names in the sport.

The first installment of Panini Obsidian Soccer came out in 2019-2020. Although it was not the most well-received off the bat, it has since gained steam and become rather popular.

Panini Obsidian Soccer is set to release on May 17th, 2022. With things getting back to normal in terms of COVID’s effects on the supply chain, there is no reason why this date should be pushed back or changed.

The popular thing about this product is that there is not much filler. There are only seven cards per box in this product. Four of those cards are guaranteed to be either an autograph or a relic. 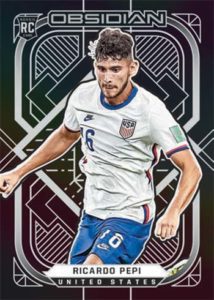 Obsidian Soccer has a beautiful look.  Get your Pepi rookie cards on eBay.

The biggest thing that makes this not popular is its price tag. As with any other high-quality product, it will cost a pretty penny to get your hands on a hobby box. Currently, a hobby box will cost around $600. If the autos are duds, you won’t even come close to earning your money back.

The final problem is that many of the boxes ships from overseas. Soccer is not a top followed sport in the United States, and you may face higher shipping charges. So, despite there being a lot of very high-quality cards in this product, the market value is not entirely where it should be compared to certain other sports.

The only release format for these cards is the good old-fashioned hobby box. 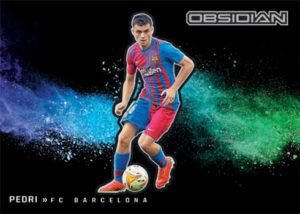 2021-22 Panini Obsidian Soccer Review Of The Base Set

The base set consists of 100 cards. However, each is limited to a mere 195 copies.

Here is the complete base set: 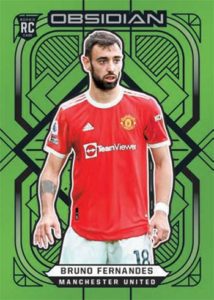 The Electric Etch insert is the basis of the Obsidian release. Look for them on eBay.

The major insert from this product will be the Equinox Parallels; their rarity goes as follows:

Obsidian boxes are not cheap. So, are they worth the expense? We tried to find out.

So far, the soccer collecting community has been lukewarm on this release. The value has not taken off. There is no sign that this is worth keeping around.

The singles market for Obsidian is not bad. Like any product, most of the cards are worthless. And don’t expect to hit any life-altering autos. But you can hit some excellent cards. The autos are worthwhile if they are superstar names since the number is limited. In addition, color blasts are always a good value. 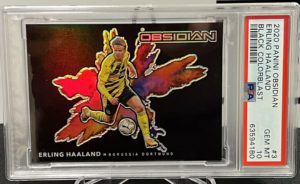 The Erling Haaland color blast is gorgeous. See what they are going for on eBay.

In conclusion, the 2021-2022 Panini Obsidian Soccer product is shaping up to be a perfect one. It is loaded with autographs and relics, and the low card count per box will prevent you from wasting your time and space with valueless cards.

This is an incredible product for soccer fans around the world. However, it does come with a relatively high price tag. While there are many cards in this product that will make you your money back and then some, if one of your hits from this box ends up being a dud, it may be challenging to find a way to make a profit.