The Prizm line has been a favorite in the hobby for a while, and in 2021 we saw Panini extend their brand into UFC. The debut release went viral, and the second edition hit the shelves on Mar 23, 2022. Our 2022 Panini Prizm UFC review will give you the lowdown on what you can expect with this year’s product.

Look for a 2022 Panini Prizm UFC hobby box on eBay.

UFC is one of the youngest major sporting leagues in the United States, founded in only 1993. It failed to gain much popularity with the public until the mid-2000s, but once it did, revenue skyrocketed. Today UFC is consistently a top 10 grossing U.S.-based sports league.

After a spike in pay-per-view sales and household-name type athletes, Topps released their first set of cards in 2009. For the next decade, Topps was the face of UFC trading cards until their acquisition by Panini.

Since taking over the UFC license, Panini has released UFC cards through some of their familiar formats. Releases have included Prizm, Select, Chronicles, and Immaculate. So far, Prizm has been the most popular, with the highest resale values and the most traffic on eBay. 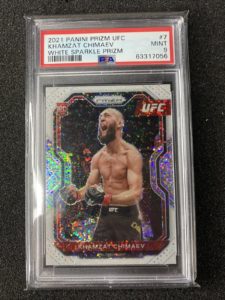 Khamzat Chimaev cards have proven a particularly strong investment. Look for his White Sparkles on eBay.

The Popularity Of Panini Prizm UFC

In just its first year, Prizm UFC made its mark on the industry. Last year hobby boxes were hard to get your hands on, despite selling for historically high prices. However, Dana White said that the market for UFC cards ended up being 130% bigger than they initially expected.

So far, internet buzz has been loud for the 2022 release, especially for a product that isn’t in a major 3 sport.

So why has Prizm UFC been so popular? Well, here’s what we love about it:

It’s a Mix of New and Old

Naturally, people tend to be interested in new products. The problem is that people also tend to be skeptical of new products. With Prizm UFC, that worry isn’t really there. Prizm has already become a fan favorite in other sports, and collectors can feel confident that its name will be synonymous with quality for the years to come.

Even collectors who aren’t particularly interested in UFC cards are gravitating towards this release because they love the Prizm format, and UFC is the new kid on the block.

Of course, this is always a matter of personal taste, but we love the look of these cards. There is a lot of variety – they use a mix of horizontal and vertical designs, some action shots and some posed pictures and the trademark Prizm flashiness.

There’s also no shortage of sleek parallels this year. Last year’s hobby packs featured parallels such as Mojo, Gold, and Black on the base set, and this year expanded to include Ice, Ruby Wave, and Hyper. Adding more additional colors suggests that Panini is fully committed to growing its UFC department. 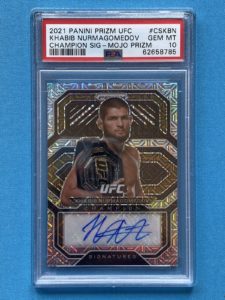 Now Is a Great Time to Invest In UFC

At first, UFC could not compete with boxing as the most popular fight-based sport. However, the past 5 years have seen a sharp turn, as some UFC fights over that time have recorded PPV sales that rival some of boxing’s most-watched events ever.

Five years ago, there were no UFC fights in the top 10 all-time PPV sales. However, as of 2022, 5 of the top 10 most-watched fights have been UFC. In other words, UFC is growing rapidly. As we continue to see more big names and a growing fanbase, we can count on continued demand for UFC memorabilia for years to come.

So far, the Hobby Box and FOTL are the only release formats that have been announced for this product. It’s currently pre-selling for $900. However, there was also a retail box last year, so keep your eye out for that. 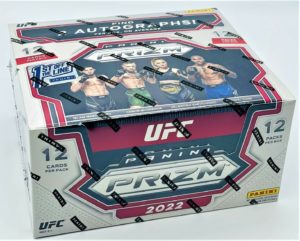 Fancy an FOTL box? They have them on eBay.

The official checklist hasn’t been released yet, but here’s what we can expect based on last year:

This year we will see the addition of Ice, Ruby Wave, and Hyper. But unfortunately, there is no information about the chances of hitting on those parallels.

Here are the inserts from last year that we expect to see back this year: 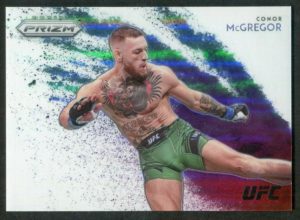 A Conor McGregor colorblast seems like a solid investment to us. Find one on eBay.

That said, there’s reason to believe that the returns on wax might not be as high this year. It wasn’t easy to get your hands on a box last year. Scarcity, of course, always drives up the resale price.

The second thing is the novelty of a debut release. A second-year product may not have the same level of appeal as an unopened box from UFC Prism’s first-ever release.

By all means, wax is the safest bet when it comes to investing, and it’s reasonable to assume an excellent return holding this product for a year or two, but don’t count on a 100-150% return like you’d have seen this past year. 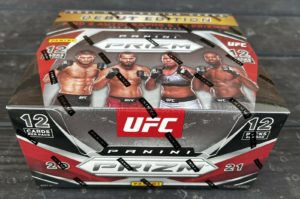 The 2001 hobby box has appreciated considerably in value. What is the current price on eBay?

Investing in singles is always a riskier game; many Prizm UFC hobby box cards fared pretty well. The box comes with two autos and 22 parallels, and many of those hits are going for high prices on eBay.

Those prices also seem to be on the rise. Prices on some of the marquee cards from the set have steadily risen over the past 3 months. Check out the difference in sale price on a few of the most popular cards from 2022:

The rising tides of UFC as a sport continue to drive up the prices of cards on the singles market.

So a few key takeaways:

The Bottomline Of The 2022 Panini Prizm UFC Review Of The

In its second year, Prizm UFC will look to build on the popularity of last year’s debut release and establish UFC in the Prizm legacy.

Overall, this is a solid product with great-looking cards and tons of parallels fetching high prices on the resale market. The sport of UFC is becoming more and more popular every year, and so far, Prizm is its premier product in the hobby.