Last year was memorable for collectors as the trading card collectible industry experienced a major shake-up. Fanatics swept up the licenses of almost all the major sports. When Panini lost its basketball and football card license, it had to make a move into another sport. This birthed their deal with World Wrestling Entertainment (WWE) in October 2021.

Collectors were left speculating on how well Panini would perform compared to Topps. The first set of cards from WWE’s new exclusive trading card partner is available for collectors. While Prizm WWE was released earlier this month, its $800 price put it beyond the reach of several collectors. With a resale price of $245, the 2022 Panini Revolution WWE is set to appeal to several collectors.

This article reviews this highly anticipated release and discusses everything you need to know. 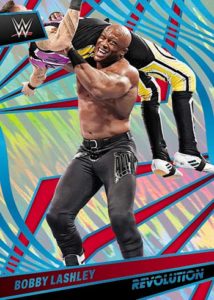 2022 Panini Revolution WWE Review And Checklist: History Of The Product

While Panini and the World Wrestling Entertainment (WWE) are behemoths with decades of experience in various domains, this product’s history is new as it’s the second series from this new partnership. The multi-year agreement made Panini the exclusive trading card partner of the WWE.

“Panini has a 60-year history in sports and entertainment collectibles and is a leader in the trading card space throughout the U.S., as well as in Latin America, Europe, and Asia. We believe that this partnership perfectly aligns our mutual interests in providing fans with exclusive collectibles and, ultimately, growing this category globally.”

Revolution WWE might be a new series; however, the Revolution brand isn’t new. It has some of Panini’s most appealing design and art, especially on parallels. Panini brings that distinct card style to WWE trading cards.

2022 Panini Revolution WWE would be released on June 3, 2022, barring any postponement. 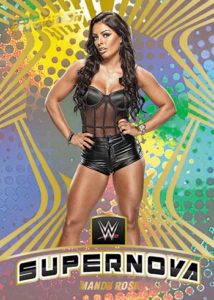 Look for other Mandy Rose cards on eBay.

Collectors look to Revolution to glimpse into Panini and WWE’s future. While this is the second release from this budding partnership, Prizm is somewhat of a premium brand and amazingly popular. But unfortunately, it is priced out of reach for many collectors.

This isn’t the case with Revolution, as it’s more of a niche release with a lower retail price. The Revolution brand and design aside, this release has a potentially iconic look and has a lot going for it. The status of this iteration of Revolution WWE is enough to make collectors rate this release highly.

While not as highly rated as Prizm, the Revolution brand is popular in other sports, most notably basketball. In addition, its remarkably loud, wild designs have found a place in collectors’ hearts. Its cards use foil accents and holographic stock to stand out and make for truly exciting cards.

We expect fewer autographs and traditional hits than in a Prizm release. But, as with Revolution Basketball, these hits are even more valuable for collectors lucky to pull them. In addition, there are several popular inserts, such as the highly valuable Galactic inserts.

A $250 retail price seems a bit much for a product without many autos, few chases, and no guaranteed hit per box. There’s also the fact that not everyone likes Revolution’s loud and colorful design.

Revolution has always been a hobby-only product, and we do not expect Panini to change with its WWE release. However, we’ll update this article with more information if more release formats are announced as the release date draws near. 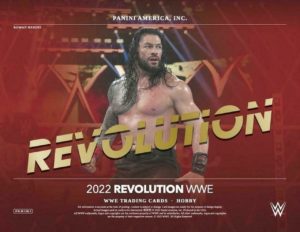 We will release more info on the checklist when it becomes available.

With the ink still wet on WWE’s deal with Panini, we only have the recently released Prizm WWE to look at when it comes to value. Let’s see how well it has performed.

Hobby boxes of the 2022 Panini Prizm WWE launched at $700 per box and sold out within hours. Its price soared to $1000 within days and is currently valued at $1,399. That’s a decent ROI considering this was only released 2 weeks ago.

It remains to be seen if Revolution performs similarly.

Chase cards from the 2022 Panini Prizm WWE have performed spectacularly well, with top cards going for $500 to $2,000. While we expect the value of most cards to fluctuate with time, we ultimately expect cards from this series to perform well. Unfortunately, again, the Revolution cards will likely be significantly less valuable. 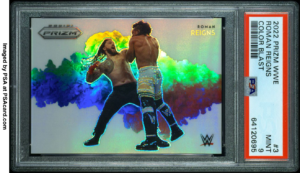 Like this Roman Reigns Colorblast? Look for one on eBay.

Bottomline Of The 2022 Panini Revolution WWE Review And Checklist

While the $250 retail price has put some collectors off this release, the 2022 Revolution WWE is a debut edition, and it has so much going for it. Its inaugural status speaks well to future investment value. We believe the best way to do so would be to chase autos and hit cards like Galactic.

While Panini and WWE’s partnership is new, Panini is a giant when it comes to churning out great cards. We expect this to keep being the case. With its outstanding design and loud pattern, Revolution is one of Panini’s popular brands, and this debut series is sure to be popular with fans.