Prizm Draft Football 2022 is set to release on June 15, 2022. Here is everything you need to know about the upcoming release in our 2022 Prizm Draft Picks Football review And checklist.

Prizm Draft was first released in 2015 as a football product. It was a landmark release, as the first to feature “draft picks” cards displaying college logos and players in their college uniforms.

Is that a good thing? That’s debatable. To many collectors, “draft picks” cards add an unnecessary population of rookies. As a result, they are usually popular only until the NFL uniform cards drop.

For example, a Joe Burrow Prizm Draft Silver rookie recently sold for $13.06. Meanwhile, the standard Prizm version sells for over $400. The NFL-licensed version selling for nearly 40x what the Draft Picks version goes for should be a cause of concern. After all, the Prizm Draft Picks boxes aren’t 40 times cheaper. 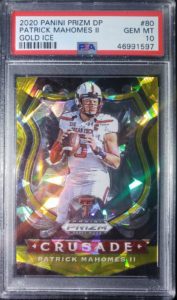 This Patrick Mahomes Gold Ice is a beaut. Get one on eBay.

Get a 2022 Prizm Draft Picks Hybrid box on eBay.

Or get a box on StockX.

There are two release formats for 2022 Prizm Draft so far. Retail will follow. Most likely mega boxes and blasters.

On the hobby level, Prizm Draft 2022 looks a lot like the previous iterations of the product. Each hobby box has

The box also advertises the chance to “find the super rare Colorblast and Stained Glass Inserts.” Those are big-dollar SSPs that have spread to every Prizm release.

There will be a hobby box and hobby hybrid box that includes five exclusive prizms – the “circle family” (basically, they look like they have bubbles on them.) The Hybrid packages are cheaper than a hobby box and include more cards. However, they only have one autograph and their own exclusive prizms. So in our opinion, the move is to pay a slight premium for the actual hobby product.

Prizm Draft sticks to the mold from previous years of the product.

These cards will feature players in their college uniforms. The product presents the first opportunity to collect the 2022 NFL Draft class. However, it also includes “past college standouts.” So, for example, you can pull an Aaron Rodgers card in his Cal jersey with a picture from 2004. 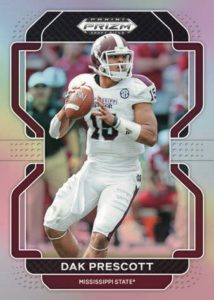 We haven’t gotten the official checklist of colors at the time of writing. However, the 2020 and 2021 versions looked like this:

The most immediate eye-roll? There are 3 one of ones.

But, if you like building rainbows, this product has a lot of great colors working for it.

We will add the full checklist as soon as it becomes available. 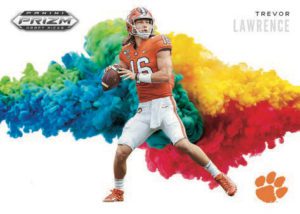 The Color Blasts are probably the best cards in 2022 Prizm Draft Picks. Get your Trevor Lawrence Color Blast on eBay.

With a pre-order price of $250, buying a box of Prizm Draft is not a major financial decision as some of the other popular products can be.

It’s nice to have a reasonably low-risk box for football collectors that miss ripping packs. But is the low-risk box worth your while?

This section will look at the different options for investing in Prizm Draft.

If you’re investing in sealed boxes to hold them, consider some numbers.

It’s important to note the Draft Picks were discontinued from 2017-to 2019, only to be picked up again in 2020 (after sports cards became the hot commodity – suspicious, right?) However, note that the 2020 and 2021 boxes are selling for more than the 2022 boxes are pre-ordered.

That’s a good sign, but there is a caveat. The 2022 rookie class appears to be the weakest rookie class since 2013. I’m not sure if there’s a single player I’d jump to my feet in triumph for their auto. It’s not a “call your friend to flex your Desmond Ridder auto” situation.

I’m not sure why the 2020 box resells for so much, either. There’s one more autograph, and it’s a class that includes Burrow and Herbert. However, looking at the resell prices of the cards that can come out of the box makes me think the boxes are significantly overvalued.

Here are a few examples:

The box sells for about as much as you can make for a numbered version of the top rookie. You would hope to recoup several times the value of a box for getting an elite card. So, the value of the singles is problematic. 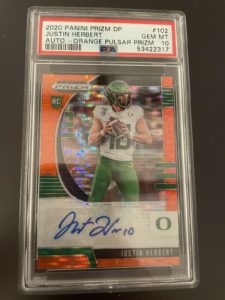 As a result, Prizm Draft rookie cards are not the move for long-term investing.

If your thoughts are, “well, at least this way, I can have a John Smith PSA 10 silver prizm without paying the Prizm premium,” I’m sorry, but that’s wrong. Again, remember what I wrote earlier: the Prizms themselves are 40 times more valuable than the draft picks versions. (This big gap extends to PSA 10’s: A Burrow draft silver sells for $85 while the Burrow Prizm sells for around $3,000)

If you’re looking for a low-cost alternative to Prizm investing, I’d suggest looking at Optic or Select. However, if those two (admittedly pricey) options are still out of reach, then I’d recommend Mosaic. Mosaic cards could cost around the same as you’d pay for a nice Prizm Draft Pick rookie, but they should hold value better.

Bottomline Of The 2022 Prizm Draft Picks Football Review And Checklist

Prizm Draft might be your product if you’re looking for a low-budget rip with family or friends. It’s bright, colorful, and has a lot of low-numbered options to pull.

Over time, however, these cards will not hold their value. If you’re buying them with the hope to rip and selling, your window of opportunity will be the first two or three weeks they’re circulating. When that new-product honeymoon phase dissipates, the value will tank.