Topps will release Series 2, the latter part of its flagship release, this June. The Series 2 checklist is another 330-card checklist and will begin with #331. CardLines is breaking down all the details in the 2022 Topps Series 2 review And checklist.

The second installment of this year’s flagship release is set to hit shelves this June. 2022 Topps Series 2 Baseball Hobby and HTA Hobby Jumbo boxes will be released on Wednesday, June 8. Each format has exclusive cards. For example, hobby exclusive cards are found in the hobby and jumbo boxes but not in the retail formats. Retail, blaster, hanger boxes, and fat packs debut later in the month.

As you’d expect, Series 2 picks up where Series 1 left off and is released mid-way through the regular season. The checklist features players not featured in the initial release and rookie cards for the game’s top new stars. If you want to know more about the differences between Series 1 and Series 2, check out our overview.

Series 2 follows the same base card design as Series 1. Topps carries some insert sets over while introducing new lines. There’s always a ton of short prints, autographs, and memorabilia cards. 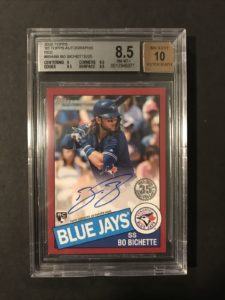 This Bo Bichette is a Series 2 beauty. Look for more of his autos on eBay.

The 2022 Topps flagship design takes on a more minimalist design than in previous years, something many collectors appreciate. Base versions feature a white border with sharp lines. Team logos are on the bottom left in a ball-like design. In addition, many have noted the improvement in the size of players’ names at the bottom of the cards.

Not everyone is going to love every design Topps releases, though. This year is no different. Some collectors have noted that it looks more like a Bowman design and is somewhat uninspired. 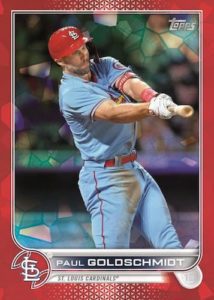 The 2022 Topps Series 2 Review And Checklist: The Checklist

The checklist for 2022 Topps Series 2 is 330 cards long. Most of the parallels in Series 2 are the same as those in Series 1. In addition, there’s a variety of inserts, autographs, and relics, some of which are exclusive to hobby and jumbo boxes.

A Note On The Rookie Class 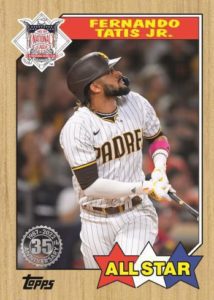 Topps carries over a few of the Series 1 insert sets in the Series 2 release:

Additionally, there are four new insert sets in the Series 2 release: 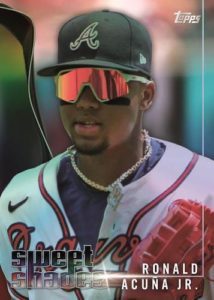 Topps is sticking with the 1987 theme in their autograph checklists. There will be autographs on the usual 1987 Topps design and the 1987 Topps All-Star design. There’s also a Baseball Stars Autograph checklist and a Dual Autograph version. Finally, there’s a unique 1/1 Cut Signatures set full of MLB legends. The parallel breakdown for 2022 Topps Series 2 Autographs is below.

What memorabilia and relics are available in the Topps Series 2 release? Here are some of the highlights.

In the Name Relics 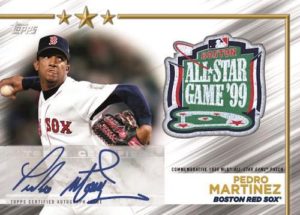 Bottomline Of The 2022 Topps Series 2 Review And Checklist: Value

While the flagship releases are anything but high-end, they include some sensational hits and iconic rookie cards. So, how does the value of this storied product hold up on the open market?

Like many others, the value of Topps Series 2 wax depends on the strength of the rookie class. Unfortunately, the 2020 and 2021 Series 2 rookie classes were relatively weak. Luis Robert headlined the 2020 rookie class, and 2021 by Jazz Chisholm Jr. and Ke’Bryan Hayes.

You don’t have much to lose buying a Series 2 hobby box. They retain their value. However, you won’t make a profit unless the rookie class includes a future superstar.

The best and brightest rookies will always garner the most attention and the highest price tags. The table below shows the raw card values for the players mentioned in recent Topps Series 2 releases.

So while the raw rookie base value isn’t very inspiring, let’s see how the hits perform.

Don’t expect any life-changing cards in Series 2. But a good auto or short print can make back several times the price of the box. 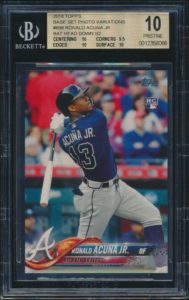 The Ronald Acuna Jr. “bat down” SSP is one of the most popular Series 2 cards ever. See what they go for on eBay.

Bottomline Of The 2022 Topps Series 2 Review And Checklist

The potential rookie class for 2022 Topps Series 2 has the opportunity to be much stronger than that of Series 1, which, beyond Wander Franco, didn’t have many obvious standouts. We don’t have the checklist for 2022 yet, but a few rookies who are likely to be featured are Bobby Witt Jr., CJ Abrams, Spencer Torkelson, Hunter Greene, and Seiya Suzuki. But, as usual, there are a bunch of hits in hobby and jumbo boxes. You’ll have a chance to find those on release day.

Nicole Cahill is a freelance writer with sports bylines at Baseball Prospectus, Fish Stripes, and Pitcher List. She also writes about mental health and recently founded a nonprofit. When she’s not fighting stigma or exploring Baseball Savant visuals, you can find Nicole enjoying a cup of coffee and a good book. View her portfolio at NicoleCahill.com or find her on Twitter at @NicoleCahill_