Every baseball season, an exciting prospect breaks into the major leagues. If that player happens to debut for a team with a long-suffering fan base, it’s just that much more exciting. In 2022, one of the most touted players making their debut is Bobby Witt Jr. But is investing in Bobby Witt Jr cards a good idea?

A Word on Investing in Prospects

Investing in the hottest and most hyped young players in the game is exciting stuff. There is the chance for a big payoff if you bet right on the next great player. But, of course, in addition to the potential for riches, the path of prospect investing is fraught with risk.

For every Ken Griffey Jr. or Chipper Jones, there is a Brien Taylor, Todd Van Poppel, or Jurickson Profar. Prospects can be one of the most exciting parts of baseball and the hobby, but prospects can and will break your heart. 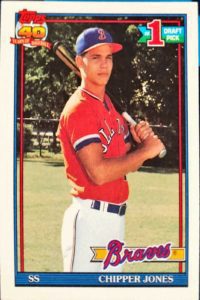 Not every blue-chip prospect is a Chipper Jones. Look for his rookie cards on eBay.

Which camp is Bobby Witt Jr. in? Only time will tell.

Investing In Bobby Witt Jr Cards: Who Is He?

When looking for a prospect primed to impact the big leagues, Bobby Witt Jr. checks all the boxes you’d look for. The young third baseman and shortstop have the pedigree and the hype. But, can he become a star in the major leagues (and the hobby)?

After a standout high school career, Witt Jr. was the #2 overall selection in the 2019 amateur draft. It culminated in Witt being named the Gatorade National Baseball Player of the Year his senior season.

In the short time since he was drafted, Witt Jr. has quickly risen to the top charts of the various prospect-tracking publications, coming in at or near the top of the pile as the 2022 season dawned. 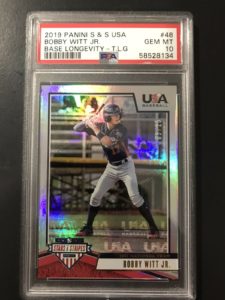 Bobby Witt Jr. has long been considered one of the top baseball prospects in America. Look for his Stars and Stripes cards on eBay.

For long-time collectors and fans, the name Bobby Witt is likely familiar. Bobby Witt Sr. was himself a high draft pick, being selected as the 3rd overall pick in the 1985 draft. He had a 16-year big league career as a starting pitcher, where he was known for big strikeout and walk totals.

In his first major league game, Witt Jr. went 1 for 4 with an 8th inning RBI double that led the Royals to victory.

In his second big league game, Witt Jr. went hitless but made a game-saving defensive play to set up a walk-off Royals win.

Despite being only 21 years old and at the start of his big league career, Witt has already appeared on 1,943 cards. His official flagship rookie cards haven’t appeared yet, but probably will this year. These run the range from pre-rookie cards to relics, autos, serial numbered, and base cards. Let’s look at some of the most expensive, plus a few others worth considering. 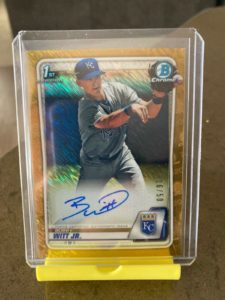 This is the card. Look for more Bobby Witt Jr. 2020 Bowman Chrome gold refractors on eBay.

Despite a slightly higher print run, the standard refractor autos numbered to 499 still are selling for an impressively high price.

Several other 2020 Bowman Chrome refractors of a rainbow of colors are selling strong in the $3-7,000 range. These are amazing pulls, but they’re out of reach for many collectors at these price points. Plus, at such high prices, the upside may not be huge. What about some lower-priced Witt Jr cards? 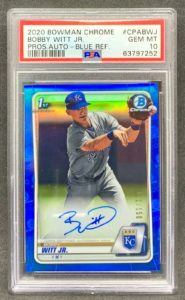 Any 2020 Bowman auto refractor is a strong investment. Look for more on eBay.

The Bowman Chrome 1st Edition Witt base card has a PSA pop of 1,062 and a PSA 10 population of 482. While those pop numbers will likely continue to rise, so will demand. This card offers an exciting mix of “base” (being a base card) and “limited” (being the 1st Edition). These cards are not as pricy as the refractors, autos, and other serial numbered cards. However, they should always be more limited than the base Chrome offering.

With a total PSA pop of 5,443 with 1,438 PSA 10’s and both numbers likely to climb, this is a Witt Jr rookie in a premium product. However, it is still a base offering and approachable, even in PSA 10 condition. 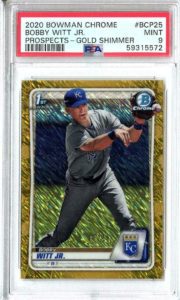 The prospects Bowman cards are a more reasonable investment. Check them out on eBay.

So, are Witt Jr.’s cards a good investment? By their nature, all prospects and young players are high risk/high-reward investments. Being a highly rated prospect is no guarantee of stardom. That being said, Witt Jr. has as good credentials as any prospect in recent memory.

So, with an understanding of the risks, it may be worthwhile to buy into the hype a bit. If it pays off, you’ll be holding some fantastic collectibles. You can join the many collectors with stories of the prospects that broke their hearts if it doesn’t. Sometimes, those stories are badges of honor that make your hobby experience much richer.

Mike D. has collected cards since he bought his first pack of Topps at the corner store in 1987. He has long been fascinated by the Baseball Hall of Fame, and of course cards of Hall of Famers, present and future.

Under The Radar 2022 Bowman Prospects