At this point, you have heard of NBA Top Shot. Last spring, the product was launched into public consciousness, making headlines for its 230-million dollar sales month and the $208,000 purchase of one of LeBron’s dunks. Top Shot offers digitally encrypted NBA highlights for collectors to buy, sell, and trade. It draws on the same elements that make card collecting fun – rookies, rare items, and parallels – without technically being a card product. Now it is coming to football and to celebrate, we give you the NFL All Day review.

While some of the initial hype was worn off, there is still an active and healthy market for the product. Last September, Top Shot’s developer Dapper Labs decided to expand its line of collectible highlights into the NFL, announcing a new product called “NFL All Day.”

The name switch has confused some people. Is it the same as Top Shot with a different name, or is it a totally different product? This article will break down everything you need to know about NFL All Day.

The Limitations Of Sports Collecting NFTs

It’s a line we’ve all heard for years, “blockchain isn’t just about crypto. It’s a transformative technology that’s going to revolutionize every industry.”

Over the past few years, we’ve seen it make its way into the sports card industry through NFTs. A few years ago, Panini launched its blockchain initiative, where they sold digital cards that owners could collect on their online profiles.

Digital cards have had some fans, but they’ve failed to generate the same excitement as physical cards. 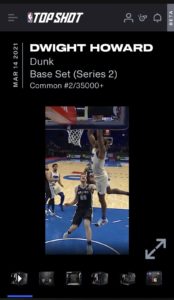 Top Shot features highlights as the basis of their NFT collectibles. Look for the best moments available on eBay.

Why Top Shot Is Different

One of the reasons digital cards have struggled is that they are trying to compete against a product with over a hundred-year legacy. So, what’s the point of having a digital card, other than the novelty? If you pull a Luka auto, 99.9% of collectors would prefer to hold and showcase the physical version.

Top Shot has been a game-changer because of its functionality. You can’t collect a physical version of the moving highlight. It is a product that must exist in the virtual sphere. So, you aren’t just collecting “digital cards” for their novelty. It’s a digital product that makes sense.

So, Are Top Shot and All Day the Same Thing?

When Dapper Labs announced their new NFL product, they boasted that it wouldn’t be anything like NBA Top Shot. Naturally, that generated a lot of conversation, as collectors wondered about the differences

As it turns out, however, the Top Shot and All Day aren’t that different. In fact, they are almost identical.

Both use highlights from specific players, with the better players and important highlights being rarer and more valuable. Indeed, the trading platform is still in its beta version and not entirely open to the public. Still, it works the same as Top Shot. Unfortunately, limited numbers of packs are only available in staggered releases, and even those with access to the beta version have a hard time nabbing them.

The main difference, it turns out, is simply in the difference between the sports. In football, very few highlights occur in isolation. For example, even a Cooper Kupp touchdown is also a highlight for Matt Stafford. So instead of just sticking to the eye-popping plays, they’ve decided to use highlights that show off critical moments within a play, rather than just the touchdown itself. Therefore, the Cooper Kupp highlight might spend more time showing him burning a defender off the line than it does him running into the endzone.

You've still got a chance to snag all these great Moments, though:

NFL All Day Review Of The Pros

There’s a lot to like about NFL All Day. Some signs point toward it being just as successful as its NBA counterpart. Here’s some of what we like the most.

Collectible highlights make much more sense than digital cards. As far as we can tell, they should be the driver of the digital market going forward. It’s impossible to collect highlights in a physical space, so the product demands that it be done digitally.

At the end of the day, it comes down to a simple question – would you instead be collecting still digital images or contextualized, moving highlights? Of course, we say highlights, and the market strongly agrees so far.

America loves football. It’s the most popular sport in America, and the numbers back it up consistently. The 2020 NBA finals were the least-watched over the past decade because the playoffs ran into the NFL season. Even Lebron winning his 4th title couldn’t compete with regular-season NFL games.

Yet, the football card market doesn’t outperform other American sports. Baseball and basketball are kings in American sports card trading. But as new products like NFL All Day attract new people to the hobby, interest in NFL products should rise. Given the popularity of American Football and its huge merchandise market, NFL All Day is primed to match the success of NBA Top Shot.

NFL All Day Review Of The Cons

The packs are overpriced. When Top Shot was first released, you could grab one for less than $10. With the hot resale market, it was almost guaranteed that you could rip a pack and flip its moments profitably. That guaranteed value was one of the reasons the product became immediately popular.

That hasn’t been the case so far with All Day. Riding the momentum from Top Shot, the packs started at $50 for the cheapest. Therefore, many of them have lost money so far. Collectors complaining about product price is nothing new. However, the grumblings coming from the All Day community may have merit.

If the All Day continues to grow, the $50 will look like a bargain, and they should be able to pay for themselves. However, for the moment, the higher price point is making it a risky proposition. 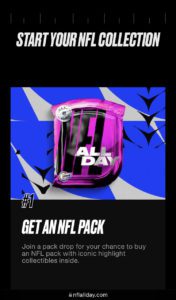 Wild West of Investing in NFTs

Investing in NFL All Day is a bit different than traditional cards.

We’re in the wild west of investing in NFT products. With sports cards, we have decades of information. Moreover, the data often provides relatively high confidence in a product’s value. The NFL All Day site could be shut down a few years from now, for all we know. But on the flip side, cards that are selling for a hundred bucks right now could be worth thousands down the line. So, it’s a good market for gamblers, with a good deal of upside and downside.

Whether to hold or rip is the eternal question for card collectors. While there is too much uncertainty with the product to know which is the more profitable route, both sides have some arguments.

Why You Should Open Your Packs

One of the main reasons opening your packs is a good idea is that it’s the only way to make money for now.

Dapper Labs has promised that there will be a way to sell unopened packs through their site. But so far, no dice. Some people have tried selling them through eBay or other backchannel methods, but it’s not a safe bet without a secure way to transfer ownership through the blockchain. You can, however, resell opened moments directly through their website, and all exchanges are secure.

You also should open your packs if you think the All Day market is overvalued. In that case, the inflated market will allow you to sell the individual moments at a higher rate instead of trying to salvage a lower price for an unopened pack when the product crashes.

A final consideration is that opening packs increase your collector score. Having a high collector score allows you early access to card drops. This is a significant advantage, considering how difficult it has been to get your hands on the product. 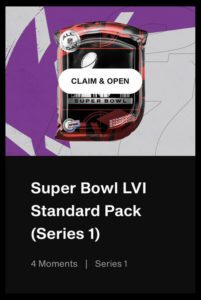 You can get NFL All Day packs on eBay. See what the going rate is.

Why You Should Hold Your Packs

There’s only one reason you should hold your All Day packs – if you believe the market will explode. And that is quite possible. But, first, the number of NFL All Day collectors is low, with 88k accounts registered. For reference, NBA All Day is around 1.5 million.

The low number means one of two things.

If you believe the second, holding on to your packs is your best bet.

Bottom Line Of The NFL All Day Review

We believe NFL All Day is poised to be the future of football blockchain sports memorabilia. Instead of digital cards, you can collect moving highlights called moments. So far, All Day hasn’t achieved the same heights as its NBA counterpart Top Shot, but it’s still in its beta version, and there is a lot of potential for its market to grow over the next year.

So how will we sum up the NFL All Day review? We love the product’s look and how easy the marketplace is to use. But unfortunately, the high price points for packs don’t seem justified right now. But that may well change.