Auctions are a valuable tool for your collecting toolkit. Whether you’re looking to add a rare new collectible to your collection, unload some items to streamline your collection, or branch out from other forums such as eBay or Facebook Marketplace.

If you missed our article on February’s auctions here on Cardlines, you can find it here. If you’re not familiar with auction houses, check out our reviews of Goldin, Heritage, and REA.

Today we’ll look at several auctions from the major houses that close in March. The weather may be cold, but the auction action is hot!

As the title suggests, this auction heavily focuses on hockey cards and memorabilia. That being said, there are odds and ends for fans of other sports. But if you’re a hockey fan, this auction should be a blast!

The highlights in this one are impressive – Wayne Gretzky’s Rookie Year Contract (Signed)? It’s here. A Connor McDavid Game-Worn Jersey? Yup. Maybe you want a Gretzky Rookie Card? Or a chance to pull one from a wax box?

There are game-worn jerseys and signed sticks, plus gloves and pucks and so much cool hockey gear.

Not into hockey? Baseball fans will marvel at the 1939 World Wide Gum Canadian Ted Williams PSA 6. How about a 1986-87 Fleer Basketball set minus the Jordan, with most cards graded by PSA? Or maybe you want to complete the set with the Jordan in a PSA 8 holder.

One of my favorites from this lot is non-sports – a dual-sig cut signature 1/1 card of two of Apple Computer’s three co-founders, Steve Wozniak and Ronald Wayne. So, what can I say…when not playing a sports card geek? I moonlight as a computer geek.

The Collector Connection’s “Post War Sports Cards & Collectibles XIV” auction closes on March 6 at 10 PM EST. With 800 items, the auction is not one of the largest but has a nice mix of sports cards in both raw and graded forms. Both vintage and modern are well-represented, although the auction skews vintage.

Another plus to this auction is that while some items should sell for big dollars, there’s plenty here that should sell at other price points.

This auction has an impressive number of vintage basketball cards, including a 1974 Topps Basketball #39 Bill Walton PSA 9. But perhaps you prefer rookie cards of Bob Cousy, Jerry West, or Pete Maravich. Or maybe you prefer breaking vintage out of wax yourself and need a 1978 Topps box wrapped by BCCE. 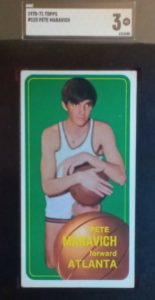 Looking for a Pete Maravich rookie card? Check the prices on eBay.

If vintage baseball rookies are your thing, you will find Warren Spahn, Harmon Killebrew, Frank Robinson, and George Anderson, better known as Sparky.

The junk wax era is well represented, with singles (raw and graded), unopened sets, lots, and even some boxes of 15k plus assorted cards.

There’s a lot of good stuff here, but I think my favorite is the 11 item lot of 1976 Boston Red Sox Official Yearbooks. Up here in Red Sox country, that’d be a quick way to make 10 good friends in a hurry!

The Leland’s “Winter Classic 2022” ends on 3/12/2022 at 10:00 PM EST. The headlines of this auction are some high-end football and some awesome baseball autographs. But, there’s also lots of variety…jerseys, bats, photos, non-sports, and more. Oh, and pages and pages of the beautiful vintage of all sports.

Tom Brady headlines this auction. The 2000 Playoff Contenders Championship Ticket #144 Tom Brady Rookie Autograph 48/100 PSA NM-MT 8 – Auto 9 opened at $500,000 is as of this writing is already north of $800,000. Or maybe you’d like something a bit lower population? How about the football that Brady threw for his final touchdown pass?

Or, if you’re into autographs, there are some PSA-graded examples from some of baseball’s inner circle. Take your pick from Ruth, Gehrig, DiMaggio, and more. 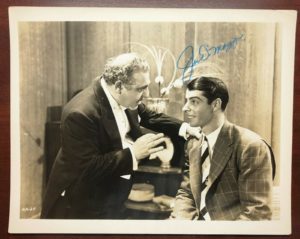 What are Joe DiMaggio autos going for on eBay?

There are lots, partial sets, complete sets, and loads of vintage and modern cards of all sports. There truly is something for everyone in this impressive auction.

If you read our article on Negro League Cards, you’ll recall that some Negro League stars appeared on cards out of Cuba or other countries. The 1946-1947 Caramelo Deportivo Cuban League Martin Dihigo is a great-looking example.

As of this writing, the Heritage Auctions 2022 Mach 26 Sports Showcase auction is still being finalized, so expect more exciting items to be added. The auction is a bit heavier on baseball but has a nice mix of all sports (with a little non-sport mixed in for good measure).

The 1979 NCAA Basketball Semi-Finals Ticket Stub Signed by Lary Bird and Magic Johnson should sell for a handsome sum. Or perhaps you prefer a 2003 Topps Chrome LeBron James BGS 10.

For the hockey fan, the listings include rookie cards of Connor McDavid, Wayne Gretzky, and Bobby Hull. The golf fan will marvel at the array of Tiger Woods items available. Finally, baseball fans can take their pick of classic cards of Jackie Robinson, Ty Cobb, and Mickey Mantle.

There’s a lot to like here, from a copy of the first Sports Illustrated to a ticket stub from the 1919 World Series. However, I think my favorite is a 1988 500 Home Run Hitters Multi-Signed Lithograph signed by ELEVEN members of baseball’s 500 home run club.

The Bottomline On Sports Card Auctions In March

March features the first day of spring (March 20) and MLB Opening Day (March 31). At least, we hope so. However, that still leaves plenty of room for some sports auction action in March. Whether you’re looking to make a big purchase, pick up a good deal, or enjoy hours of “window shopping” via your favorite web browser, these auctions are well worth checking out.

Mike D. has collected cards since he bought his first pack of Topps at the corner store in 1987. He has long been fascinated by the Baseball Hall of Fame, and of course cards of Hall of Famers, present and future.