There are millions of listings on eBay every month. It’s understandable that a few gems might slip past you. To help make sure you stay tuned in to some of the best auctions on eBay, Cardlines will be featuring some of the best listings of the upcoming week. Here is the first installment of our 5 coolest cards on eBay series.

Note: we’ll be picking auctions that align with current events in sports. With the NBA playoffs in full swing, this week’s features will be NBA-focused.

This card is as good as Jayson Tatum rookies get. At the time of writing, Tatum’s Celtics have swept the Nets, and Tatum did as well shutting down Durant as anyone ever has.

A Silver Prizm is one of Tatum’s best cards, and this one is a BGS 10. That’s huge – in fact, there are only 32 BGS 10’s on the planet so having one on eBay during this potential playoff run is an opportunity.

Note: this card is located outside the US. It is coming from South Korea, so it could take a while to arrive.

The auction ends on May 1. 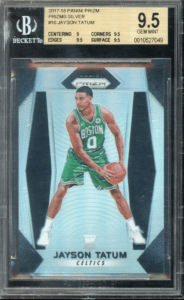 What Jayson Tatum silver Prizms are available on eBay?

With Devin Booker sidelined for an injury, more responsibility falls on CP3’s shoulders. That could go one of two ways: the Pelicans could somehow win, or the Suns prove to be a deeper, more talented team, and Paul carries them into the second round. Either way, Paul’s legacy will remain untarnished, but he could add another notch to his belt of accomplishments.

This Exquisite rookie card is probably the prettiest rookie I’ve ever seen of Chris Paul.

The auction ends on April 26. 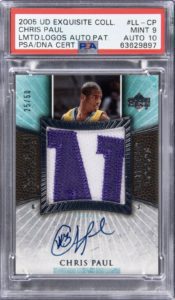 There are some incredibly beautiful Chris Paul exquisite cards on eBay.

The same story applies here; just sub out the names. With Middleton sidelined for the series and probably the next, it’s going to be up to Giannis to carry the Bucks. That is, assuming the Bucks can get past the Bulls. If both of those things happen, Giannis will perhaps have his biggest challenge: beating a great team with less help as a reigning champ.

Sadly, this card is only graded an 8. Nonetheless, it’s a phenomenal low-numbered Giannis rookie auto. I wish it were a BGS 9, but I would still love to have it in my collection.

The auction ends on May 1. 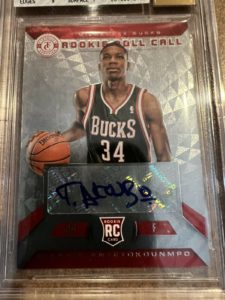 Sticker auto or no, this is a sensational card. Look for more Giannis rookie autos on eBay.

Luka? Do you mean the hurt guy?

I had to add a nice Luka rookie to this list because Luka’s Mavs are up 2-1. He currently looks positioned to make it out of the first round of the playoffs for the first time of his career. All that while missing the first three games!

But that’s the catch. Imagine a world where he comes back and plays well and the Mavs upset a Booker-less Suns. Brunson is suddenly a Top-10 NBA player, so they take down the Golden State Warriors in the WCF. Suddenly, the Mavs are Finals-bound, and Luka cards are at an all-time high.

Will that happen? Probably not. But worst-case scenario, you end up with a very lovely Luka rookie.

The auction ends on April 28 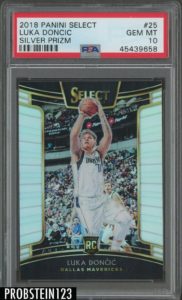 Will Luka lead the Mavs to the finals? Either way, you will want to check out the Luka Doncic Silver Prizms on eBay.

Jordan Poole is exploding into the spotlight as the third Splash Triplet (The name admittedly needs a bit of work). But if Splash Bro 3.0 can keep up the scoring barrage and unbridled confidence, he might be the Warriors’ key to a Finals run. This guy was playing in the G-League last year, and now he’s dropping 30-bombs on the regular – it’s truly incredible how far he’s come.

This card is raw. But if you would prefer a graded one, you’re more than welcome to shop around.

The auction ends May 1 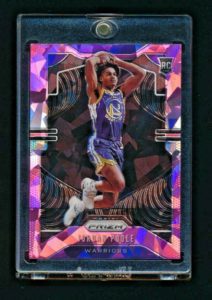 Jordan Poole seems to have graduated into the elite class. Look for his Cracked Ice parallels on eBay.

These are amazing cards, understand that the decision to buy them falls on you and you alone. In no way are we endorsing the sellers. Additionally, as we’ve written about before, the playoffs are not always ideal for investing. So, buy with caution!