With millions of listing on eBay every month, a few gems might slip past you. So to help make sure you stay tuned in to some of the best auctions on eBay, Cardlines will be Cardlines will feature the 5 Coolest Cards On eBay Right Now.

I almost didn’t include this card on the list. Not because it’s not a fantastic card. Instead, because I want it and will be making a bid. As many Cardlines readers know, I’m a huge Heat fan. The 2012-13 Crusade product was one of the most fun rips of the last 20 years for collectors, and the low population of this card makes it one of Jimmy’s best rookies.

Now, let’s talk about Jimmy Butler. The Heat just downed a Sixers team that included an (injured, certainly) Joel Embiid, who finished runner-up in the MVP race, and former MVP James Harden. Butler was hands-down the best player in the series.

While the Heat’s Finals run will probably end in the next round, Butler is still a beloved – and occasionally divisive – star. He also takes his game to the next level when the playoffs roll around. This card will be a great addition to any collection. Hopefully mine. 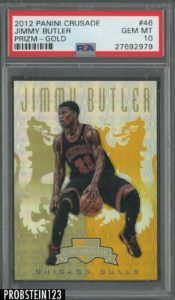 Get a Giannis RPA on eBay.

The Giannis love affair will be over after this one, but something happened this week that made me put him on the list…

Giannis is the best player in the world. And I realized it.

LeBron was expected to make the finals every year for about a decade, and even if he lost, he’d go down with an insane average of like 40-10-10. He was a single-man wrecking crew that could take any group of teammates and at least carries them through the East.

You may wonder why I’m writing this after the Bucks were eliminated. But you can hardly blame the “Greek Freak” for that. This week, Giannis showed me he’s now “the guy.” He dragged the Bucks through a matchup with the Boston Celtics, who are the best team in basketball in my eyes. Giannis has done the LeBron thing – playing out-of-his mind with Greyson Allen, Bobby Portis, and a bunch of randos against a complete, dangerous Boston team.

This rookie autograph is a BGS Gem, and Giannis will be a Finals threat for the next 8 – 10 seasons. Every. Single. Year. Invest accordingly. 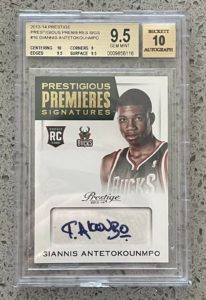 What’s the best way to invest in the 2022 rookie class? Perhaps by bypassing it and investing in Bryce Young, who will be drafted in 2023.

Okay, okay. That’s not entirely fair. The 2022 rookie class might have some surprises, but there’s no arguing it’s a down year for the rookie quarterback. That said, the new NIL rules have allowed Topps back into the football card market through Bowman University, which has autographs of college football stars.

Bryce Young was included in this set, and although he won’t be suiting up in the NFL just yet, this is his first big-time card and, at some point, could be viewed like the 2009 Mike Trout Bowman auto. It’s hard to say how this product will age, but if Young could repeat as Heisman, win the championship, or secure the #1 pick next year, you’ll be an early adopter with a valuable card. 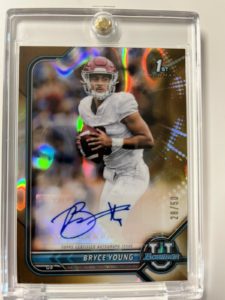 Manny Machado has been on a tear. Tatis Jr.’s injury should have hurt the Padres, but instead, they’ve thrived in the absence of their young star. Through his first 32 games, he’s batting .383/.460/.625 with seven homers, 22 RBIs, and 76 total bases and making big plays in the field.

Machado is riding a wave right now that could carry him to an MVP, and a Gem Mint Rookie autograph could see a big increase in value if this continues.

The auction ends Sunday, May 22 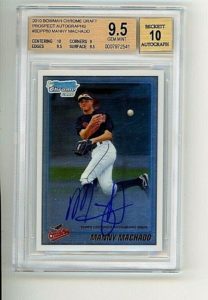 Fortnite fans, where ya at? Collectors of the game might recognize the Black Knight as perhaps the most iconic of the Fortnite skins – particularly the skins from the game’s first season. However, the Black Knight has been around longer than most and is essentially the Charizard of Fortnite.

This PSA 10 version of the Black Knight base card could perpetually increase in value as Fortnite becomes more than just a video game – it could become Epic’s entry point to the metaverse. If that happens, this card will be impossibly iconic. 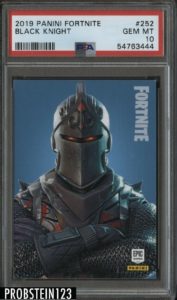 While the 5 Coolest Cards On eBay include some unique cards, understand that the decision to buy them falls on you and you alone. In no way are we endorsing the sellers or guaranteeing a satisfying transaction. Additionally, as we’ve written about before, the NBA playoffs are not always ideal for investing in NBA cards. Please do so at your own risk.