On January 23, 2022, the first official UFC NFTs dropped. Vancouver-based Dapper Labs, best known for their NBA Top Shot release, is behind UFC Strike. UFC has has a meteoric rise in recent years to the top of the pile in martial arts spectator sports. But as we all know, the NFT market is softening. So, how strong is this line? Find out in our UFC Strike review and checklist.

UFC Strike Review And Checklist: The Pros Of UFC Strike

The pace of UFC events heavily rewards the NFT format of drops and releases. Unfortunately, the NBA season has a certain amount of drudgery and repetition, and standout events like the All-Star Weekend and the Finals are few and far between.

The big-ticket event-oriented calendar is a valuable element of the release. When fans feel excited about a specific event, they will be motivated to buy relevant NFTs. Therefore, the biggest and most memorable fights are likely to produce higher-value moments.

UFC President Dana White is fully aware of this potential. He noted, “If it keeps heading in the direction it’s heading in now, it’s going to be massive. We’re even at a point now where Dapper Labs is creating a variety of content during fight week. The open workouts, the press conferences, the weigh-ins, and things like that.”

Finally, Dapper Labs has proven itself to be an innovative and highly competent force in the NFT world. As a result, their products are more likely than most to maintain and accrue in value.

UFC Strike Review And Checklist: The Cons Of UFC Strike

It’s shit like this why I need to get the fuck out of the sorry ass UFC. Didn’t you guys suspend nick for 5 years and fine me hella money for a vape pen?! Now you’re reaping the benefits. I hope nobody buys this bullshit 👎🏼👎🏼👎🏼👎🏼👎🏼🖕🏼 pic.twitter.com/I3yPB9uJT9

However, keep in mind that Diaz and his brother have both been in trouble with the UFC for cannabis use. Therefore, they believe it is unfair for the federation to profit off its image.

See what Top Shot moments are for sale on eBay.

On January 31, 2022, the initial release saw packs underperform in terms of hits, and the distribution of moments was not as advertised. A Dapper Labs statement acknowledged that: “We discovered after the drop that there was a bug with the new pack-stuffing tool that didn’t meet our expectations or standard of excellence. As a result, we utilized a new technology to assemble and distribute the packs to provide a smoother experience to our collectors and new UFC fans. Unfortunately, after the drop, we discovered that the new tool did not work as intended and did not properly include the expected amount of Champion Tier Moments in the packs just sold.”

In general, the value of NFTs and Crypto has taken a hit recently. There is a significant amount of backlash against the format. In addition, UFC is highly popular, but it’s not clear that it will remain a top sport in the long run.

The overall volume of sales on the platform is not particularly auspicious. In February, at its peak, UFC Strike rung up $613,277 in one day. But recent figures are dismal. On May 29, 2022, sales totaled a mere $11,259. The market cap of UFC Strike has also been shrinking but more slowly. Whereas it stood at $15.71 million on April 19, it sits at $10.52 million heading to the end of the month.

Signing Up For UFC Strike

If you don’t have a Dapper Labs account, you will need to get one to use UFC Strike. Considering that the company is already the premier NBA and NFL NFT maker, that is probably a good idea anyway.

Signing up is a reasonably straightforward process since the account merges with existing Google, Apple, and social media accounts.

I already have an NBA Top Shot account. So, I thought the UFC Strike account would merge with that one. However, it did not. But the good news is that my Dapper Balance from Top Shot does carry over from Top Shot to UFC Strike.

How To Pay For UFC Strike NFTS

Dapper Labs has made paying for their NFTs quite simple. The company has its own blockchain and allows users to purchase directly using their credit card or bank account through their online wallet. Therefore, you do not need cryptocurrency to purchase moments through Dapper Labs. You can also withdraw profits made through the sale of moments quickly and easily.

You can pool your resources from different lines (Top Shot, NFL All Day, UFC Strike), as there is only one Dapper Labs wallet per user. 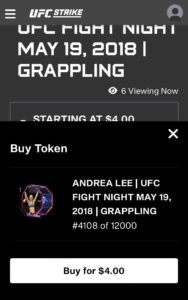 UFC Strike has Collection Challenges, just like its older sibling NBA Top Shot. They debuted on the platform on April 8, 2022, becoming an inseparable part of the experience.

How does it work? When Dapper Labs releases a new UFC Strike pack, it is often accompanied by a challenge. You are given a time frame to complete the challenge, requiring you to purchase a certain number of moments. If you complete the challenge within the allotted time frame and hold all the relevant moments until the clock expires, you gain an exclusive moment.

For example, they had a recent challenge: the UFC Vegas 54 Collection Challenge. The challenge commemorated Michael Chandler’s KO against Tony Ferguson in Las Vegas, Nevada.

You received the coveted Michael Chandler moment if you held the appropriate list of moments (and it was considerably long) on May 17.

I was unable to purchase any packs in time for this review. However, I decided to look up a couple of pack openings on Youtube and see how they did.

Here is the first one I looked at:

Here are the three NFTs that landed in this virtual pack ripping:

Yes. They got the Pimblett moment twice. So, as you can see, the overall value of the contents of this pack is $12. At a buy-in of $50, that is not exactly a good value.

Let’s look at another pack:

Here the Youtubers opened a Round One premium pack, which they bought for $250.

The pack was very close to being a total bust. However, the Conor McGregor moment saved it. Still, I wouldn’t take much comfort from the value of this pack either. 3 out of 4 moments are close to worthless. Meanwhile, an NFT featuring (possibly) the biggest name in the sport doesn’t guarantee any significant profits either. Considering the NFT is the only UFC Strike moment featuring McGregor (at least so far), you expect it to involve a more considerable profit than $140 over the pack price.

We opened a couple of typical packs. But what about the highest value moments? I took a look at the recent sales to see what I could find. Here are some of the top and lowest asks on the platform:

The amounts here are nothing to sneeze at. But certainly, these are not great numbers for the top moments of an NFT series.

UFC Strike Review And Checklist: A Full List Of Drops And Releases

The Dapper distribution model is built around highly publicized and particularly competitive drops; as veterans of Top Shot will know, you are given a random number and placed in a waiting room when you sign in to a drop. You will be allowed to purchase a pack if they do not run out before your turn.

Here are the specs for each.

💥 The waiting room for the UFC Strike: Round One Premium packs is now OPEN 💥

The first-ever pack released on UFC strike dropped in late January 23, 2022. Here is the complete checklist.

These limited edition NFTs were released in only 2500 packs in total.

The packs celebrate the event in Phoenix, AZ, on May 7, 2022. The release includes 22 new NFTs. There are two types of packs available for this release: base and elite. Here are the specifications for both.

In case you missed any, this is my re-cap thread.

I started off the week breaking down the #UFCStrike Dojo pack. I also gave my rankings for EVERY moment in that drop. https://t.co/nSOw586zUS

The newest release only comes with one type of pack. However, there is a beautiful selection of moments on hand in this lower population mint. The packs go on sale June 1 at 2 PM EST.

Bottomline Of The UFC Strike Review And Checklist

UFC Strike opened with a wave of popularity. In addition, the UFC format seems conducive to NFT success, and the product enjoys the backing of the highly successful Dapper Labs outfit. As a result, there are reasons to be bullish about the future of UFC Strike.

Nonetheless, for a product released in late January, it shows an awful lot of strain by May. Sales are a mere fraction of what they were to start with and the top moments are not worth what Dapper Labs would like them to be. It doesn’t look like UFC Strike is a path to untold riches.

But here is why UFC Strike will survive anyway: UFC is popular, and its format fits well with NFTs commemorating the big moments. In addition, dapper Labs has shown an intuitive ability to build releases competently around fight events.

Finally, the NFT market is fragile now. But what those writing off NFTs and crypto do not understand is that these revolutionary formats aren’t just a gimmick. Instead, they provide flexibility and security that is invaluable for the operation of modern commerce. As a result, the overall price of NFTs will rise again, and UFC Strike will gather steam along with it.

What Are Socios.com Fan Tokens?