SAGE cards is a mysterious company. Therefore, it is not easy to answer the question: what is SAGE Sports Cards?

They do not have a functioning website or much of a social media presence. They once had an active website, but apparently, the company has let the domain lapse. It seems that their only nod to self-publicity is their Twitter account, which is quite active.

What Is SAGE Sports Cards? The Micro-Printer™ Approach

But when the company did have a website, it exclaimed that SAGE was conceived as the sports card equivalent of a microbrewery. Geideman said, “Making quality collectible products is the main goal of our company. Because we are a Micro-Printer™, we don’t have to worry about large overhead and costs. That, quite simply, allows us to pass tremendous value through to collectors and offer a great product that no other company is able to put together.”

No, that doesn’t mean the cards are unreasonably hoppy. Instead, the company claims to value quality over quantity while maintaining competitive prices. 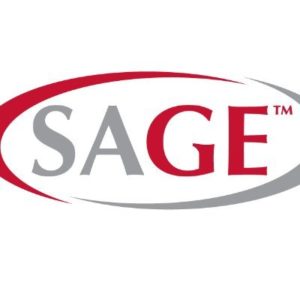 A History Of SAGE Collectibles

However, they have carved out an interesting niche in the hobby. Established in 1999 by Tom Geideman and Robert Sadlack in Sewell, New Jersey. The company soon moved to its current location in Vista, California.

The company has specialized in college draft sets. However, as we will see, it has branched out quite a bit since then and now releases a wide variety of sets.

Tom was one of the first employees for Upper Deck. According to his bio, he was “the first employee of UDC. I picked the players and created the trading cards for all the baseball products – including selecting Ken Griffey Jr. as card #1 in the very first product.” After stints at the Scoreboard Inc. and toy giant Mattel, he formed SAGE Collectibles in 1998.

Geideman teamed up with fellow Upper Deck and Scoreboard Inc. alumnus Robert Sadlack to form the company. Incidentally, the name SAGE is a mash-up of the two founders’ names (Sadlack and Geidman).

What Kind Of Cards Does SAGE Make?

None of the SAGE cards are licensed by the major professional leagues. That is one factor that allows them to produce cards at lower prices.

The designs vary wildly, but overall they have successfully made attractive designs. More importantly, their cards do not look like knock-offs of the major card producers.

SAGE emphasized autos and memorabilia cards. Therefore, when you buy one of their products, you can expect a generous dose of both.

One of the great things about SAGE autos is that they are already in-box. They do not have any redemptions. The company prides itself on this fact and has even poked fun at Panini on its Twitter account regarding their massive reliance on redemptions:

What Is SAGE Sports Cards? An Overview Of SAGE Products

Though SAGE is a veteran company, it has not released too many products in its history. Instead SAGE has focused on releasing a few products with a large number of hits. This approach befits their Micro-Print brand.

The HIT draft series put SAGE on the map and remains the essential release by the company. The Low part of the series provides cards of the likely draft picks before they are picked. The product usually launches a few weeks (in some cases days) before the draft occurs. That way, the release capitalizes around the excitement of this major event.

Loyal consumers return to this brand because it provides many autos for a relatively low price. For example, the 2021 release featured no less than 16 autos per hobby box and 3 per blaster.

Let’s look at a breakdown of the hits for both blasters and hobby box releases:

The series is also known for its 1/1 sketch cards. The 2021 version included art by the wonderful freelance artist Gary Kezele. Please don’t take my word for it. Check out his Instagram.

SAGE continues to follow the picks after the draft has taken place. And they do so with a unique approach.

Are you sick of going through endless base cards to get to that one auto? If so, Aspire Football may be the product for you! Every box contains 20 cards, and each one is an auto.

The line focuses on the latest draft picks from the first and second rounds. Selections from the 3rd round and below are not included. Therefore, boxes tend to contain multiple first-round picks.

Technically, all of the cards are hits since they are autos. However, what differentiates the wheat from the chaff on this release are the numbered parallels.

Cards come in the following parallels:

Note: This series was aptly named SAGE Autographed Football Cards until its 2020 release.

The product is a revival of a sports card trading brand released through the auspices of the Goudey chewing gum company back in the 1930s. The brand was revived by one Dr. Brian Price, who sold the rights to Leaf in 2014.

The base set is small. Containing a 48-card pack. Meanwhile, there are 28 base cards in each blaster. Therefore, it is quite an easy set to complete.

However, Leaf lost interest in the product, and SAGE picked up the rights in 2018. Since then, SportKings blasters have been a common site at retail stores throughout the land.

The release is a multi-sport one, primarily old-timey greats from different sports branches.

Every year, the design is identical, which may appeal to traditionalists, but has made the product a hard sell for modern card enthusiasts. As you can see, there is a “SportKings Gum” in a banner at the top of each card. In addition, the athlete’s name appears in a black bar at the bottom of the card. Additionally, the athlete’s chosen sport is represented in a silhouette. Meanwhile, the athlete is recreated in a painting. Finally, if you turn the card over, there are some choice factoids about the individual.

The main attraction in the SportKings boxes is the guaranteed memorabilia card in every pack.

The other hit in the pack is the mini-cards. Each card in the set has a mini-parallel, with one to be found in each pack. In sum, the hits in each box are

SAGE used to release a line of cards centered on the NBA draft. Like its football cousin, the product is unlicensed and features the players in their college uniforms.

It was one of the initial releases of the company. The first set covered the 1998-1999 season. That iteration included a Kobe Bryant auto, which has retained substantial value, as you can imagine. Unfortunately, the release was discontinued after the 2006-2007 season.

All in all, I can’t find too much information on SAGE basketball releases. However, there is still a fair amount of basketball wax and cards available on eBay.

What Is SAGE Sports Cards? A Guide To Value

I know what you are thinking. Sure, SAGE may have a ton of autos in every box. But how much are they worth? Indeed, an auto of a popular player will always be worth something. However, when they appear in unpopular releases, the value tends to be far lower. So, how does the long-term value of a SAGE auto compare to its licensed equivalents?

One card loomed above them all in the HIT 2021 Football Draft: the Trevor Lawrence auto. So, how did the people who got them to do? First, let’s look at some comparisons. All cards are raw.

As you can see, the SAGE cards compare favorably with the other non-licensed and college uniform products. Collectors do not seem to have any particular preference between the unlicensed brands. Obviously, licensed products like Origins are far more valuable.

Few people have SAGE wax sitting around. But theoretically, how well does it age?

Hobby boxes for the SAGE signature product, Premier Draft, can be hard to locate for previous years. For example, I was unable to find a single box of the 2017 or 2018 releases for sale. The reason is not difficult to surmise. It is a product you rip on arrival and not a long-term investment.

Therefore, I found as many years as I could for this comparison.

2005 garners an exceptionally high price because it may include a rare Aaron Rodgers auto. But in general, the hobby boxes maintain a value of $130-200. Therefore, if you buy a box and save it, it will likely retain its value. However, do not expect a significant increase unless an unexpected generational star emerges from that year.

What Is SAGE Sports Cards? The Bottomline

SAGE has carved out an important niche in the hobby. The main reason: their boxes tend to be full of hits. Most notably, their Aspire set has nothing but autos.

I was concerned this would significantly water down the value of their autos. However, I do not see that it does. Their cards compare favorably with most non-licensed or college uniform products. Collectors seem to like the design and have a healthy respect for their products.

So, how should you go about making the most of SAGE releases? Next time there is a player in the draft you firmly believe in, stock up on SAGE products. If you buy enough, it is virtually guaranteed you hit a bunch of the specific auto you want. After all, hits are so plentiful in these releases. In this way, you can obtain autos that will maintain a competitive price for a relatively small investment.

What Is SAGE Sports Cards?